The Vergina excavation already numbers several decades of research. Ever since 1938 until nowadays, the archaeologists of the Aristotle University of Thessaloniki and the Archaeological Service have been continuously working on site bringing to light new monuments. It was in 1856 when the French archaeologists and traveler L.Heuzey during his journey in Macedonia had discovered the first ruins of ancient structures in the “Agia Triada” area west of Palatitsia village, at the spot where the village of Vergina would later develop, and had indicated their significance. Excavations were resumed in the 20th century by the Aristotle University of Thessaloniki, hen professor K. Romaios with a team of students undertook the research of the Vergina remains in 1938.

The breakthrough of the history of an on-going excavation has undoubtedly been the research in the Great Tumulus and the discovery of the royal tombs (1976-1978). These monuments caused universal admiration as well as intense debate on their meaning and interpretation. The excavator Prof. M. Andronikos applying an earlier comment made by the English historian N. Hammond, initially (1976) linked the ruins of the archaeological site of Vergina with the ancient city of Aigai, the ancient capital of the Macedonians while in 1977, he suggested the identification of the diseased in the grand Macedonian tomb in the Great Tumulus with king Phillip II. Since the beginning, those views became useful regarding excavation as both recognizing working methods and the starting-point in the search of the extended area of Vergina, which produced quite significant results.

After the impressive discovery of the Great Tumulus, the next appealing but also difficult target of excavation research in Vergina became the ancient city itself. The theatre was identified next to the already well-known big structure of the 4th century BC megaron while slightly to the north the city’s market -place (agora) came to light and the sanctuary of the Eucleia. The eastern sector of the city revealed the Sanctuary of the Mother of Gods (dated to the 4th century until the Hellenistic times) and other public and private buildings offering rich information on the ancient city. The theatre was among the early structures to appear during the 1982 excavation season, right after the discovery of the royal tombs and became a true point of reference for the excavation on the basis of its historical data and morphological features. 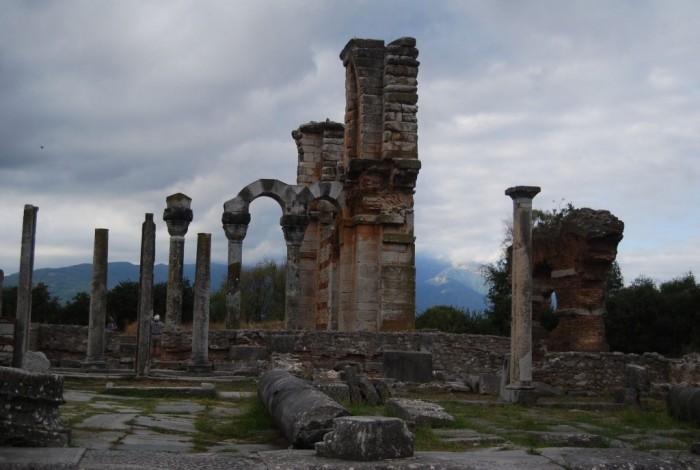 The Ancient Theatre of Vergina

in the summer of 1982 and quite close to the palace, just 50 m away from its northern side, the first stone remains of the ancient theatre of Vergina came to light. In the coming years, excavation revealed the extensive monument in its entirety, thus adding to the picture of the ancient city of Aigai an important facility for human activity. The ancient city had been already identified by the excavator M. Andronikos in 1976 with Aigai, the ancient city of the Macedonians, where the dramatic events of the king Phillip II’s murder unfolded in 336 BC. According to ancient sources, the conspiracies of the royal court ended the dynamic reign of Philip inside the theatre of Aigai during a celebrating ceremony for his daughter’s wedding in the presence of representatives of the southern Greek cities. The discovery of the big tombs in the Great Tumulus in 1977 changed radically the view about the archaeological site of Vergina. Also, M. Adronikos’ suggestion to identify the deceased in the grand unlooted Macedonian tomb with king Philip II opened a great debate and set the prerequisites for the archaeological research at the time. The ancient theater was revealed slightly below and in a short distance from the northern side of the large building of the palace that dominates the western side of the city and very close to its walls. It extends over a fairly low and smooth slope that falls from the southeast to the northwest facing north. A little lower, to the north, excavations have brought to light the remains of the city’s civic agora with its temples and altars made of porous stone as well as the royal votives of the sanctuary of Eukleia.

The theatre and the neighboring palace form a single building complex designed and built in the second half of the 4th century BC. Based on recent dating of the palace and its corresponding features, the theatre must have been built at the end of Philip’s reign. The theatre was never completed and was abandoned in the mid-2nd century BC, when the city of Aigai was destroyed.
The theatre is a short distance north of the palace of Aigai – Vergina. The monument had few stone parts from the outset, while a large part of the cavea was earthen. The parodoi, the simple stage building and the first tier of seats with the circular well of the orchestra are all built of stone.

The east side of the cavea is formed by the low natural slope, while the west side appears to have been an artificial construction, probably made by filling in the area. This explains the uneven length and half-finished construction of the aisles of the cunei. These technical works were obviously never completed and the theatre remained unfinished.

The stage building is in the simplest known form, with two adjacent areas linked by an open stoa. At the centre of the orchestra is preserved the base of the thymele, the theatre altar in honour of Dionysos.

The cavea and orchestra have been laid out along three centres, while the parodoi are constructed in different ways: the east parodos consists of two limestone walls, while the west, of which only the foundation survives, must have included only the large retaining wall.

The monument is in a good state of preservation, given that it has few stone parts and an earthen cavea. However, the limestone of the built sections is constantly subject to erosion and requires conservation. The theatre area is open to the public but cannot be used due to the lack of certain basic practical requirements (electricity, water supply, drainage). 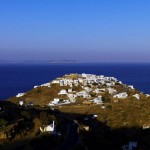 The Emblematic Kastro in Sifnos 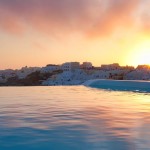 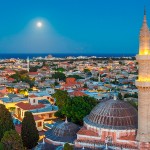 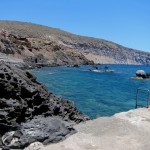 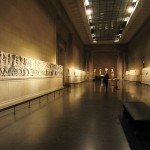